James Wharram is known for his characteristic multihull designs that have enabled thousands to follow their dreams of building and sailing their own bluewater-boat. Over the years, his designs, and rigs, have been constantly developed but still remain true to the principles of simplicity, beauty and romance. At Rolly Tasker Sails, we are thrilled when we provide sails for these very special craft, which we often do.

“In a world of shifting values, to build and sail one’s own boat, gives an inner certainty, strength and aptness to live one’s own lifestyle”. James Wharram. 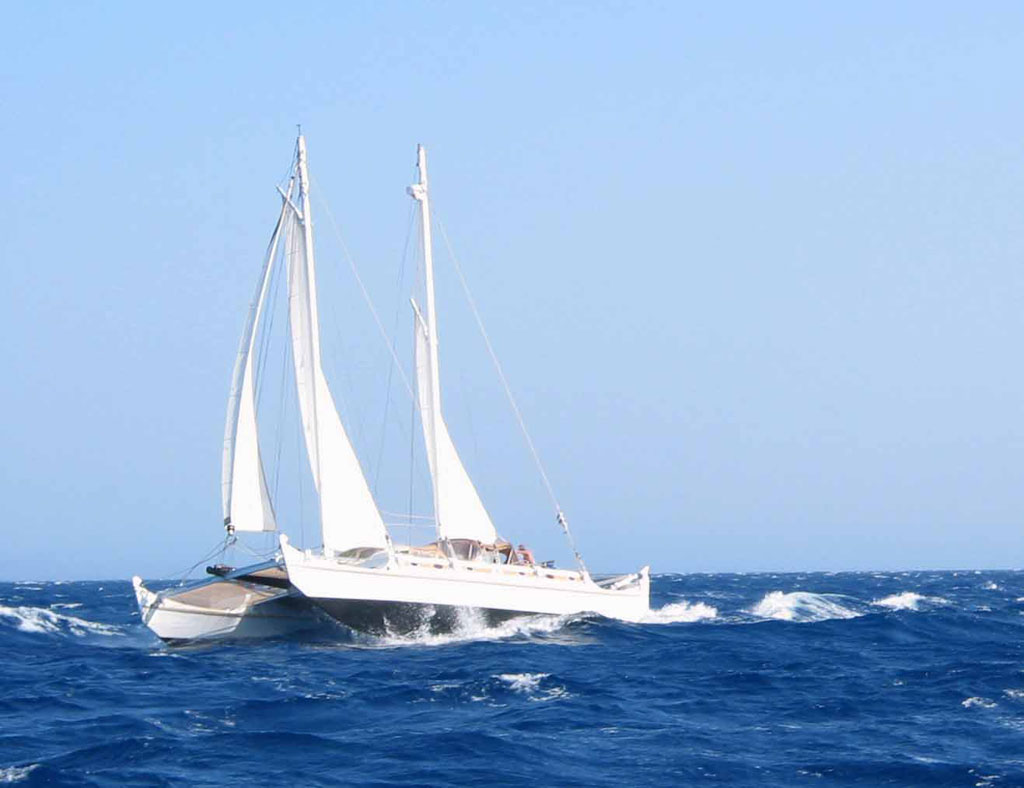 James, born 1928 in Manchester, UK, is acknowledged by many as the pioneer of offshore catamaran cruising. In 1956, he made the first Atlantic crossing in a multihull, on the 23-foot cat “Tangaroa” which he had designed and built himself. This was a small and very simple boat, but it carried him and two young German ladies all the way from England to Trinidad. The return voyage was made with the 40-foot catamaran “Rongo” that the three built on the beach in Trinidad, with some help and advice from Bernard Moitessier, himself a bluewater legend. In 1959, James and his two girls sailed “Rongo” from New York to Wales and so became the first to cross the Atlantic West to East in a multihull. Ever since, he has devoted his life to the design of simple but capable catamarans for amateur builders. The basic principle that runs through all of his boats is his firm conviction that sailing need not be expensive and that less is often more. In his highly creative and productive working life, he has constantly developed his designs, always looking for ways to make things cheaper and easier to build, but also more effective in use.

His design ideas are based on the ancient Polynesian “double canoes”, basically large platforms with open bridge-decks, whose two hulls are joined by strong beams that are lashed together, rather than glued or bolted. This to give a more flexible structure that is tough through its bounciness, rather than pure static strength. 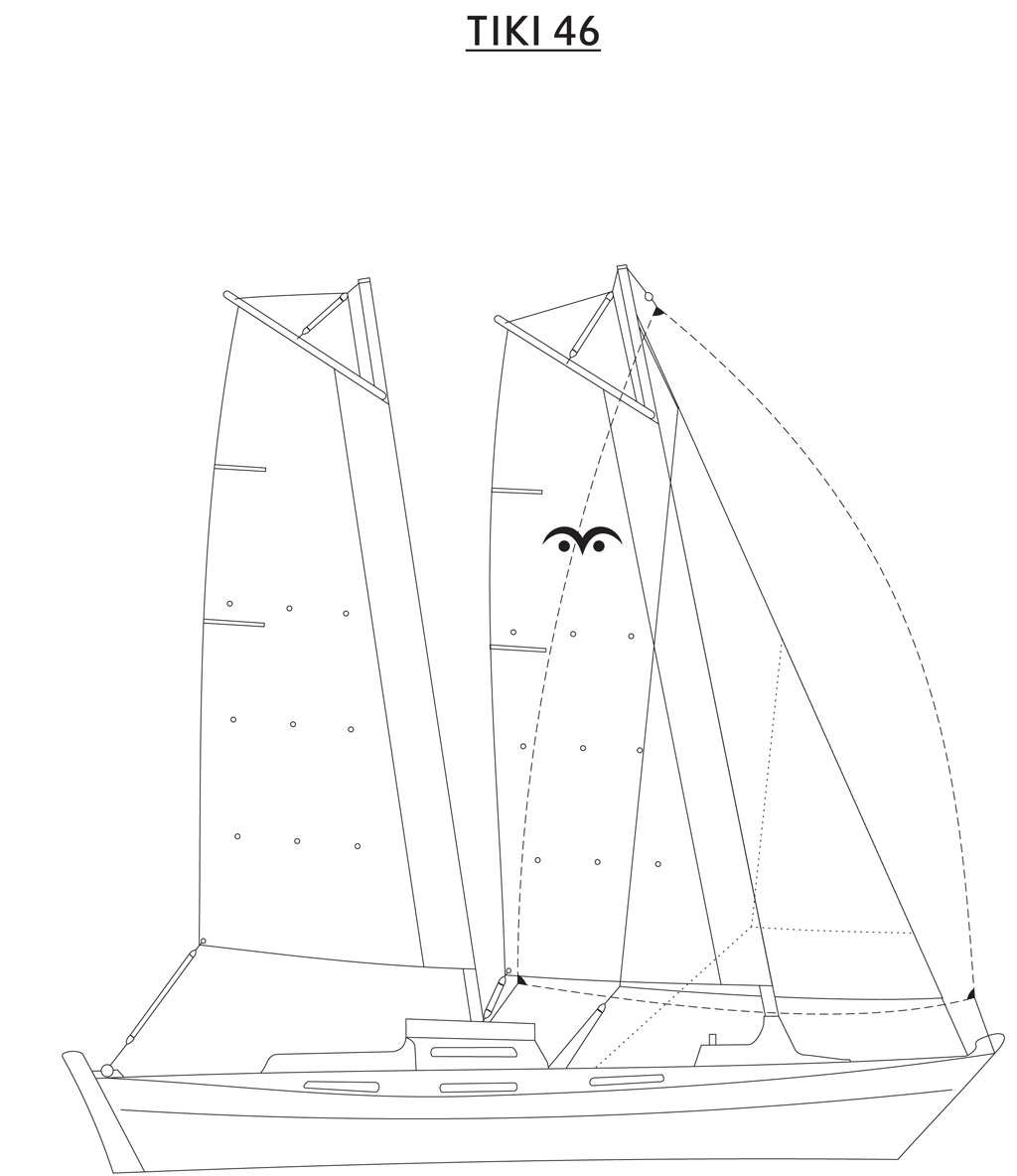 The best example for the latter is his simple but very efficient Wingsail rig. This shows James’ approach to sailing maybe better than any of his many clever design details: Preferring clever modesty and intelligent simplicity over advanced but expensive high-tech. The “Wing Sail” concept is a high-aspect mainsail with only a short gaff (similar to more modern “Fat head” Mainsails used in other multihulls) to combine upwind performance with more downwind sail area in the mainsail. The Wharram Wing sail however is ingeniously simple, in keeping of course with his overall design philosophy. The simple sleeved sail luff effectively reduces mast turbulence and needs neither slides nor mast groove. Even the halyards run inside the sail sleeve. No full battens are needed, either, and the short gaff allows twist control by means of a vang, while camber is controlled by sheeting angle and traveller positions. This simple yet advanced sail is not only used on the small, coastal catamarans of the Tiki range, but also on many other designs, right up to James’ flagship, the majestic, 63-foot Pahi design.

At Rolly Tasker Sails, we are proud to be providing many sails for the various Wharram designed catamarans. As the first choice by so many bluewater sailors around the globe, and always thriving to provide best value for money, we feel a natural connection with the world-wide family of Wharram sailors.

James Wharram Designs make up a large portfolio of designs. Always with the same philosophy but in different forms, shapes and sizes. Apart from the more simple “Classic” designs of the early years, there is the range of more sophisticated “Tiki” designs. These vary in length from 21 to 46 feet; from coastal sailing to ocean voyaging. The larger Tiki designs have a central deck pod to give more shelter. Larger Tiki designs are being lived on permanently or used as work spaces, several are also successfully operated as charter boats. The “flexispace” concept of layout allows these boats to be tailored for the intended use.

We have made many Wharram Wingsail mainsails, jibs and downwind sails for Wharram Tiki 21, Tiki 26, Tiki 30 and Tiki 38 designs. 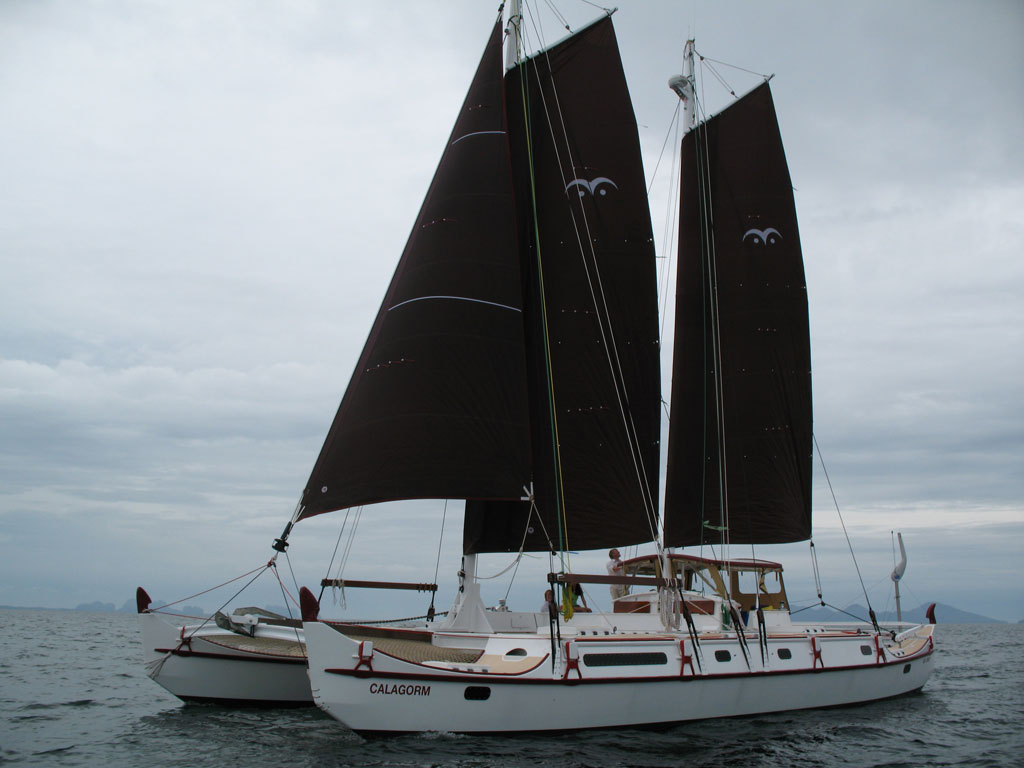 The Pahi designs have a more rounded and, as Wharram himself says, female shape than the Classic or Tiki designs. This range again spans all sizes from the Coastal Trekking Pahi 26 to the impressive 63′ flagship of the Wharram fleet, “Spirit of Gaia”. They offer a different visual approach to the more basic Classic Tiki designs but are also easily built. Rope lashings for the beams were first used in these designs to give a shock-absorbing, flexible connection of beams to hulls. The Pahi 42, “Captain Cook”, has become a popular live-aboard ocean voyaging boat which set fresh standards for ocean cruising when it was first introduced in 1979.

We have made many Wharram Wingsail mainsails, Genoas, other foresails and downwind sails for Pahi 42, Pahi 46 and Pahi 52 designs.

These are the perfect, simple but fun beach catamarans for the family or camping tours on inland or sheltered coastal waters. They can be trailered or transported on the roof of a car from one sailing area to the other. Easy to build for affordable week-end adventures.

We have made gaff mainsails and jibs for the Hitia 17 design.

For more information on James Wharram Designs, go to the Wharram website. 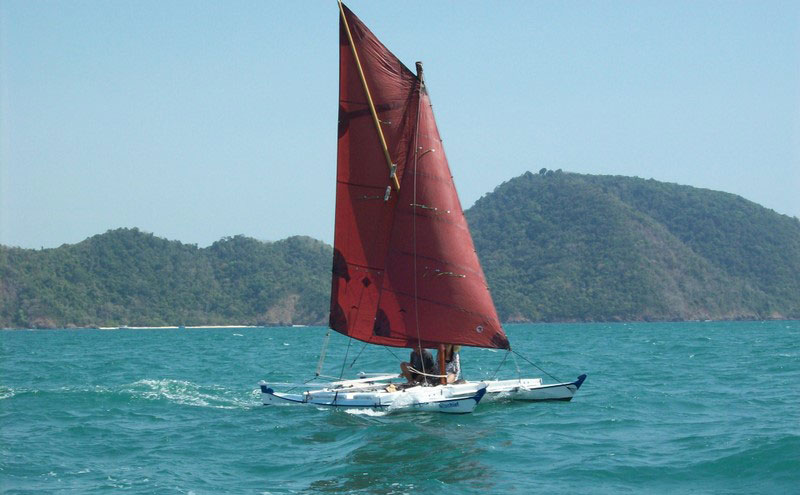