Should you have visited the Rolly Tasker Sail Loft in Phuket over the past few years, you will probably have met the friendly Frenchman, David Desage, as the local Operations Manager for Rolly Tasker Sails. David, who came to Phuket 8 years ago as base manager for Dream Yacht Charter and who joined Rolly Tasker Sails a year later, first to run the mast and rigging section there. He later took over the operations management of the entire loft.

David will now be moving back to his native France for family reasons, but also because a very tempting business opportunity has arisen for him in the Rolly Tasker Sails “universe”. Together with the distributor for Rolly Tasker Sails in France, David has taken over a long-established sail loft in South Brittany with the goal to develop the loft and push forward the RTS Brand presence in the territory. 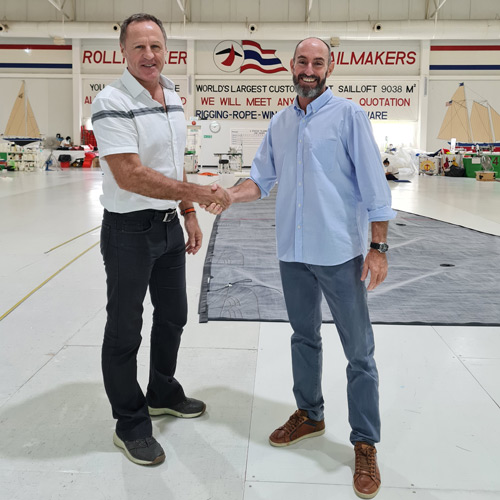 David’s compatriot Eric Gryszela will now be taking over the day to day management of the Rolly Tasker Sails loft in Phuket. After 16 years as professor of engineering systems, production, and the technical design on computer (CAD) at a university in France, Eric came to Phuket 9 years ago where he ran his own company for boat refit, yacht electricity and watermaker agent. Before that, he was engineer on private yachts between 30 and 60 metres length, based in the US. Eric is now looking forward to helping to grow Rolly Tasker Sails and develop new projects. He said: “Rolly Tasker Sails is a great and important company that has the capacity to increase even further. I thank Sven Cornelius, CEO of Rolly Tasker Sails, for his confidence and trust.”