TO READ MORE CUSTOMER FEEDBACK
FROM AROUND THE WORLD CLICK HERE

Blue Water Yachts specializes in services for Macgregor, Venture and Tattoo Yachts and also provides new sails made by Rolly Tasker Sails for these boats.

Roger and Mary Lou MacGregor began building boats in the late 1960’s, starting with a boat known as the Westwind. From the beginning the company was called Venture Boats, derived from Roger’s MBA Thesis at Stanford University. Within a few years the line had expanded to include swing keel boats from 17 to 24 feet. Development of what we refer to as the “Keelboats“ continued until 1987 with the most popular model being the Mac 25, a boat which has been inducted into the United States Sailboat Hall of Fame. During this time MacGregor also produced the high-performance Mac 36 catamaran and the first version of the Mac 65 ULDB. Blue Water Yachts began selling MacGregor boats in 1988 and quickly became their largest dealer, ultimately selling nearly 1000 new MacGregor Yachts.

In 1987, Mac introduced the water ballasted MacGregor 26, a boat now referred to as the 26 Classic, or 26C. Early models were equipped with a vertically retracted daggerboard (26D) while the later models had a swing centerboard (26S). The MacGregor 26C was much easier and lighter to trailer than any similar boat, and offer great sailing performance along with improved interior accommodations. This boat, especially the daggerboard models, are widely considered to be the fastest sailing of the trailerable MacGregor models. Over 6000 26 Classic boats were produced, during its production run it was the most widely produce cruising sailboat in the world.

In 1992 MacGregor introduced the Mac 19, the first model designed as a sailboat with the ability to plane under power. The Mac 19 was produced until 1995 with over 800 boats built. This was the first Mac model that Blue Water Yachts collaborated with the factory during development

The Introduction of the MacGregor 26X Powersailer

The very popular MacGregor 26X is a unique hybrid of motor and sailing boat. The resulting design is anything but traditional, some say neither a “real” sailor, nor a “real” motorboat. But is that really true? At least, on the outside, the striking modern look of the MacGregor 26 certainly is not what a lover of traditional sailboats would expect, but the true qualities, as so often, lie inside. The MacGregor 26X is so versatile in that it does sail quite nicely and does plane along under motor at an astonishing speed, often the perfect combination for most recreational sailors 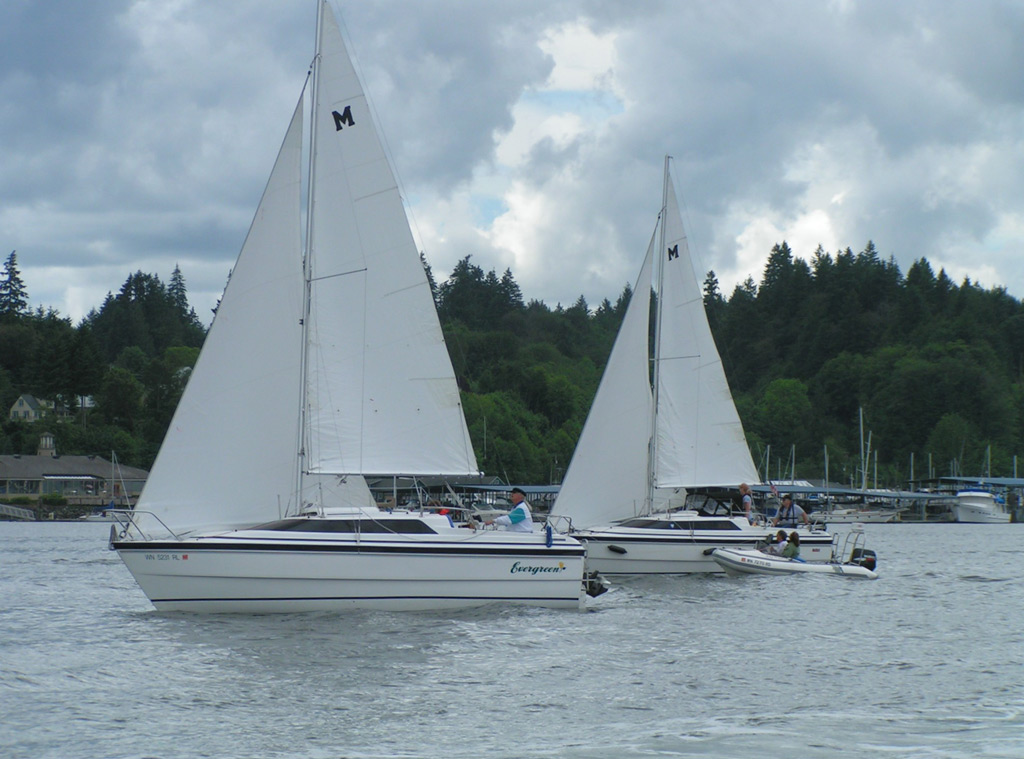 The MacGregor 26X is also easily trailerable and can be launched and rigged by a single person in less than an hour. To top it all off, this remarkable boat also offers reasonable weekend or holiday accommodation for the average family of four. The concept is so unique that a new term was coined for it: The “Powersailer”. From 1995 to 2003 over 5000 26X’s were produced, again, the bestselling cruising sailboat in the world over its production run. From design through prototype testing and production Blue Water Yachts worked closely with Roger on the development of the 26X, a boat that was not only larger, but a big step forward in sailing performance from the M19. 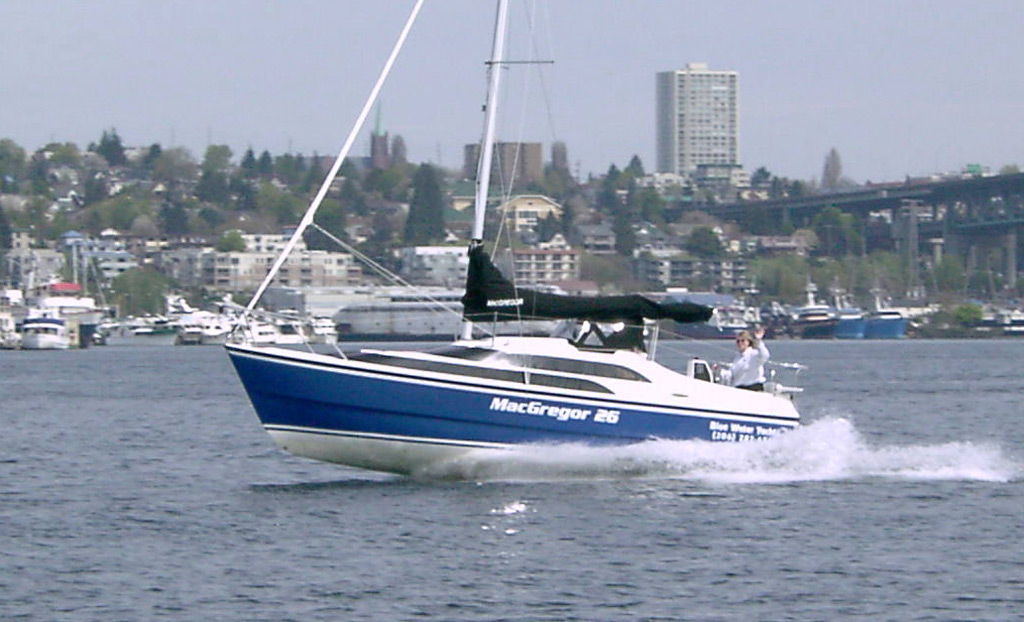 Development into the MacGregor 26M

The last entirely new model from MacGregor was the 26M. Often thought of as a development of the 26X, it is in reality an entirely different boat. From a sailing perspective, the most significant changes were the re-introduction of the daggerboard, which greatly improves sailing performance and a taller rotating mast. Apart from this, Roger MacGregor tweaked the hull lines, with a deeper V bottom and softer chines to reduce drag under sail and improve ride under power in choppy water. The boat also has 300 pounds of fixed ballast in addition to the water ballast for increased stability but can still be towed by larger cars and nearly all SUV’s, with an empty weight of 2550 pounds or 1160 kilos.

MacGregor and Blue Water Yachts worked together to apply the lessons learned over 8 years of production and customer feedback from the 26X to create the final development of the MacGregor Powersailer. In 2005 Blue Water Yachts created the “concept boat” La Perla Noir to explore the ultimate sailing performance potential of the 26M, many design features of that boat were incorporated into future production boats or have become Blue Water Yachts optional accessories.

All models taken together, the MacGregor facility has built close to 40,000 boats (plus about 15,000 15’ beach catamarans) from 1967 to 2014. When Roger & Mary Lou MacGregor retired, their daughter Laura MacGregor Sharp incorporated Tattoo Yachts in Stuart, Florida to produce the Tattoo 26, an updated version of the 26M. Production of the Tattoo 26 ran through 2015. Beginning in 2007, Blue Water Yachts in Seattle, WA became the factory parts supplier for all Macgregor and Venture boats, BWY now has the surviving tooling and drawings for all legacy parts and also provides technical information and customer support to the MacGregor community.

A good suit of well-cut sails obviously is the key to good sailing ability. Blue Water Yachts offers a variety of sail options produced by Rolly Tasker Sails to suit your sailing style. Whether your goal is ease of sailing and less heeling on a breezy day or winning the club race on Friday night, Blue Water Yachts and Rolly Tasker Sails can give you the sails you want. These include downwind sails such as an asymmetrical spinnaker, a variety of headsails and even a powerful flat top mainsail (for the 26M). Blue Water Yachts has worked with the sail-design experts at Rolly Tasker Sails to produce a line of sails that not only are guaranteed to fit your MacGregor properly but also have been specifically made with features and sail shape to optimize the sailing characteristics of each Mac model. Our top-of-the-line Lite Skin sails have become a very popular option for performance-oriented MacGregor Yacht owners.

Most of the standard MacGregor sails are kept in stock and ready to deliver at the best possible prices.  Ordering is easy on the Blue Water Yachts’ web site, or you can contact them by email or telephone if you would like to discuss in detail which sails would be best for how and where you like to sail.  BWY also offer sails with special features or custom designs to meet your needs. On these custom sails, delivery is typically about 6 weeks.

Todd McChesney of Blue Water Yachts on why he went for Rolly Tasker Sails: “We chose RTS because we like the quality of the product, and the pricing works great for our customers, whether they are cruisers who want their boat to be easy to sail well, or are club racers who want the best chance to win.”

Sailors from the Pacific Northwest

Blue Water Yachts is owned and managed by Todd and Cheryl McChesney. Todd was born in the Northwest and has spent most of his life there. He comes from a boating family, owners of McChesney Boat Works, so his recreational boating experience includes the operation and maintenance of many different boats of all sizes, both power and sail. He has owned many different boats himself. He founded Blue Water Yachts in 1988. Shortly thereafter he sold his first boat to Cheryl, his future wife, sailing and business partner. Todd and Cheryl enjoy sailing (both racing and cruising) and going to dog shows with their Papillons, which are great boat dogs.

Cheryl McChesney also grew up in the Northwest, spending most of her early years boating in the San Juan Islands and Canada on a Cal 29.  Cheryl cemented her interest in sailing in 1988 when she purchased a new MacGregor 26 Classic. Shortly thereafter she joined the Blue Water Yachts team. Several move up boats later, she has become a very skilled sailor and racer, having driven boats from 23’ to 70’ to wins in many races including the Puget Sound Sailing Championship and the Newport to Ensenada race. Today Todd and Cheryl enjoy sailing their MacGregor 26 Classic and their J130.

More Information on Services and Sails