It was another gorgeous sunny day on Sydney Harbour in late October last year. The annual Beneteau Cup in Sydney was about to start, an event that now goes back over 25 years. The breeze was an expected NE of 8 – 12 knots for the running.

Many Beneteau types in action

The event runs under two divisions, spinnaker and non-spinnaker. Each has two races on varying courses around Sydney Harbour, of about 1-2 hours in duration. It brings out an eclectic collection of Beneteau yachts, this year being no exception, with an amazing array of Beneteau Oceanis, Beneteau First and even CC models from as far back as the early 1980’s up to the latest releases. 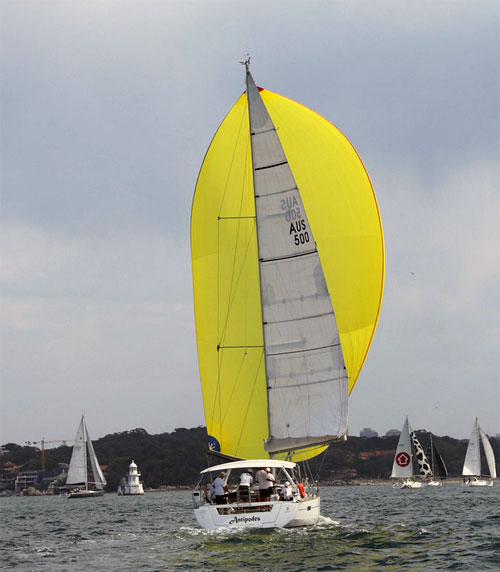 The day started with the usual pre Covid-19 gathering with ample Champagne and croissants followed by the briefing and collection of our day’s essential on-water supplies – t-shirt, hat, wine, beer, sandwiches and fruit to sustain us until post-race refreshments. Of note, Rolly Tasker Sails was again a major sponsor of the event with all participants receiving an RTS document sleeve and all placegetters across both divisions winning an RTS sail bag.

As always, this year’s event brought saw some intense racing and the skippers showed real competitive spirit as they pushed their boats to the maximum in the favourable conditions. With the Spinnaker fleet well out ahead the non-spinnaker division fought it out on their shorter course but were beaten home in each race as the spinnaker fleet revelled in the conditions.

With Greg at the helm and Sam calling the shots and running the bow, ’Antipodes’ saw some very tough competition. Such as a Beneteau First 45 and the newer Beneteau Oceanis 46.1 and 51.1 models, and seemingly not having much of a chance against these newer and more slippery rivals. Race 1 saw a couple of long reaches where the new Code O shone, driving the boat along at around 8knots in a 12 knot NE breeze. A lucky call at the top of the course saw us claw back 2 places and with the breeze shifting right the downhill run was again ideally suited to the Code O.

As the breeze built, we headed into Race 2 with a great start to windward of the fleet. At 16knots with a full headsail we were close to our comfortable up-wind limit and continually headed to the extremities of the course to minimise tacking. A bit of reaching. A few mark roundings and then a 3km run down to the finish with the big yellow Spinnaker at close to its limit saw us cross just one boat length behind the Beneteau 51.1 and take out the race on handicap.

At the end of the day The Rolly Tasker Sails equipped ‘Antipodes’ came away with a 2nd in Race 1 and a 1st in Race 2 to again take out the Cup in Spinnaker Division – the one that counts – and a boat load of goodies.