Sail Testing on a Long-Distance Race

Rolly Tasker Sails CEO Sven Cornelius competed in a very special long-distance race and used his boat as a perfect testing base for a number of new sails designs along the way.

The race we are talking about is a slightly eccentric, privately organised event, which has the potential to become one of the world’s iconic offshore yacht races. Even although this is, at least up to now, more a fun race that is not to be taken too seriously. The simple idea is to sail the Baltic Sea, from the southernmost point to the furthest North a ship can get. It all began in 2016, with just one competing boat. However, 2021 already saw a record number of 44 entries, of which 29 actually made it to the finish. The race starts on Midsummer Day in in Wismar, Germany, and goes nonstop to the northernmost point, which is the tiny village of Töre in northern Sweden, not very far below the Arctic Circle. 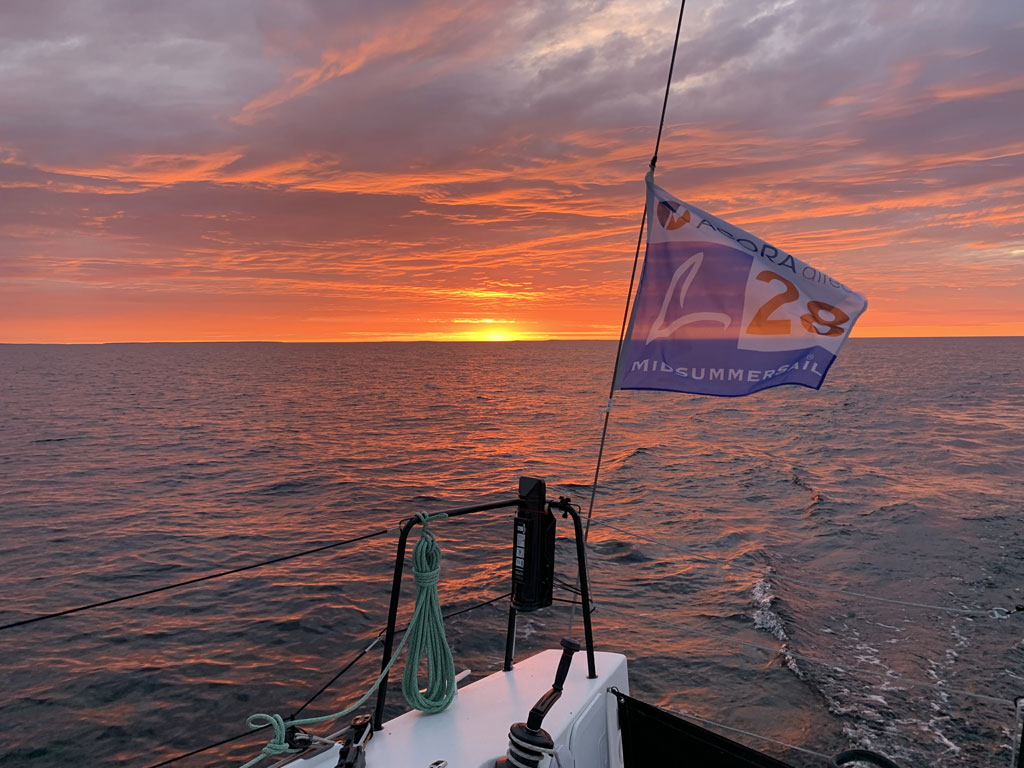 This is a distance of around 900 nautical miles and presents a tough call for various reasons. There are no tides worth mentioning, but very changeable weather systems and, at certain points along the way, heavy commercial shipping with several TSS and traffic lanes to consider in your overall tactics. Prolonged periods of absolute calm are also common in summer and a good test of nerves and endurance that seems to be a good therapy for usually hyperactive managers. On the other hand, if and when the wind pipes up, the long and narrow Gulf of Bothnia can become quite a nasty stretch of sea. 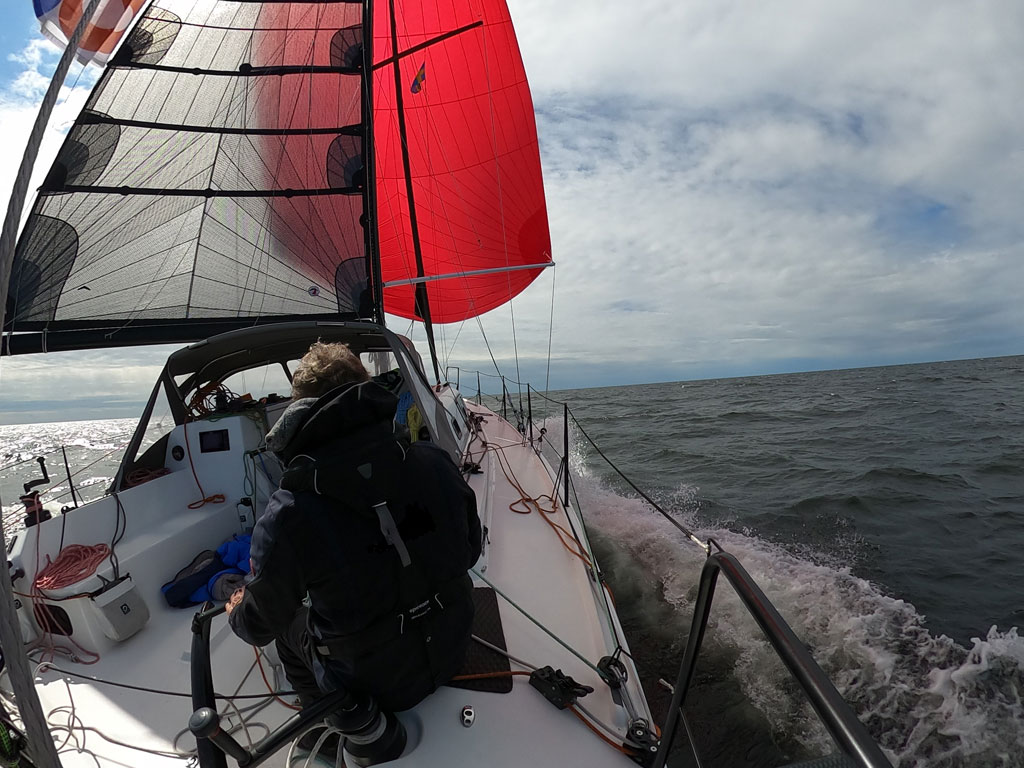 “For the race itself, we sailed about 950 miles”, reports Sven. “And many of these were quite demanding. Good weather information is an absolute must, and some quick decisions are needed when the pattern changes. Some of our competitors, who have done the race before, took short cuts inshore through the skerries and half submerged rocks, but we decided to play it safe and stay in deeper water.” That said, the organisers specifically point out that the race cannot be sailed in boats with a draft of 3 metres or more. “In some parts along the way, shipping is dense and a real stress factor. Especially when this comes in combination with sea fog in which we were caught several times.”

When trying and testing various new sail configurations, Sven and Dirk also set up the gennaker on a pole, like a symmetric spinnaker – much in the way that the long-term cruisers Amy and Matt on their yacht “Florence” explained in a video. Also, in very light winds, a light and powerful gennaker gives you the chance to create your own apparent wind, up to a point, at around 90 to 100 degrees of wind angle – something that is of course impossible with a symmetric spinnaker that needs far greater wind angles from behind. 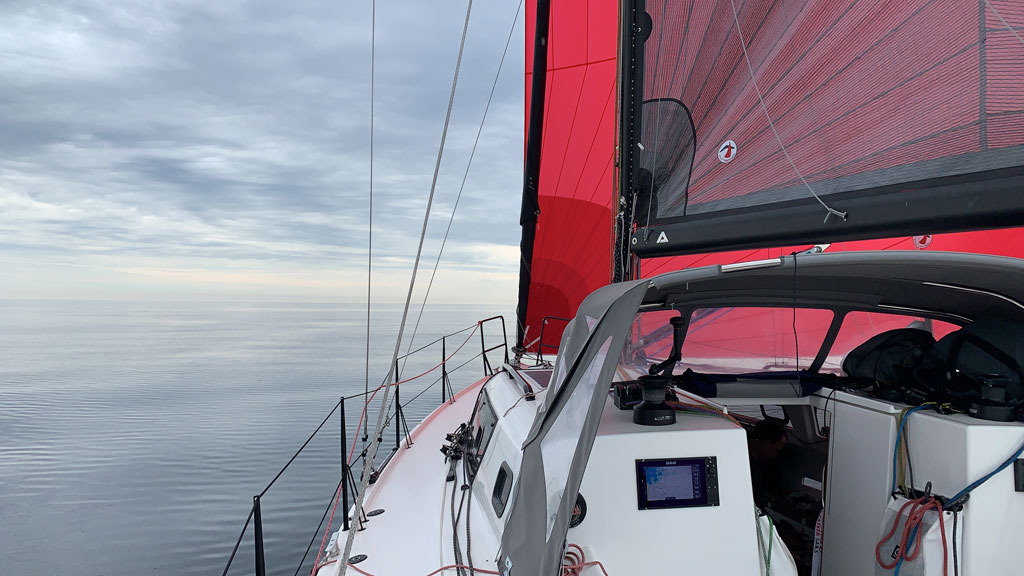 NOT HERE FOR THE SCENERY

However, overall Sven and his crewmate Dirk both thoroughly enjoyed the experience. So much, in fact, that after crossing the finish line in Töre and drinking one Gin Tonic on the famous, bright yellow “postbox-buoy” that marks one end of the line, they immediately turned around and sailed nonstop back, more than 1000 miles this time, to Sven’s home town of Bremen on the North Sea. “After all, we are here for the sailing, not for the scenery!”, said Sven. 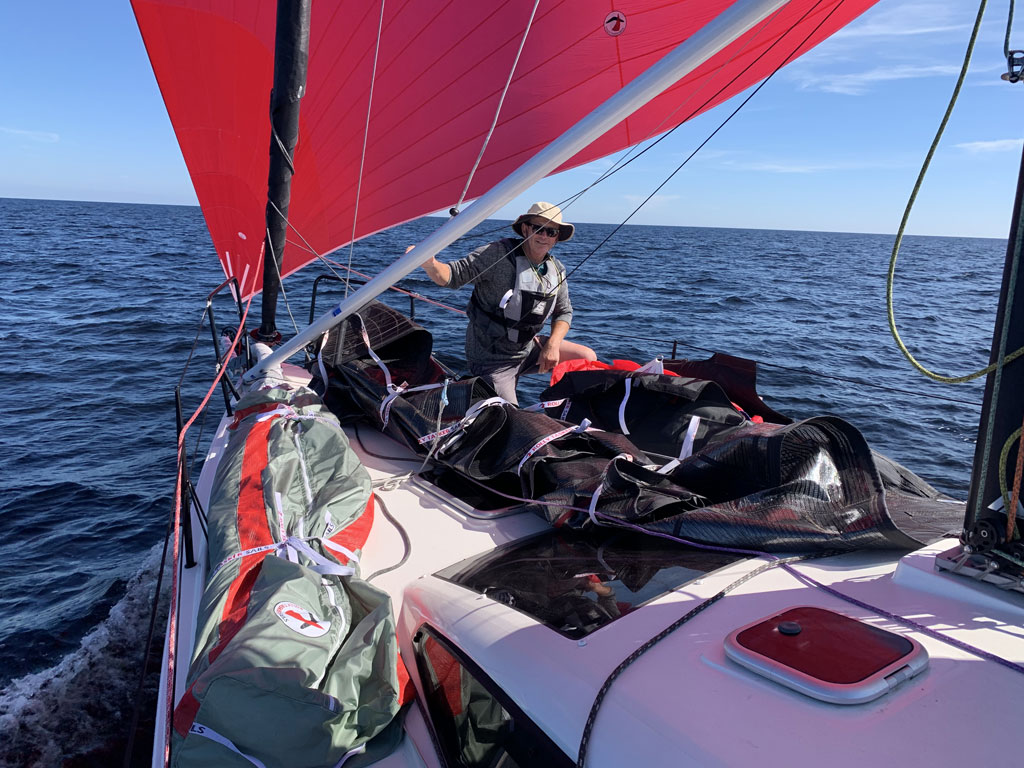 However, they were also sailing to do some serious work. “We had on board a full set of GPL carbon laminate upwind sails (Mainsail, Cutter-Staysail and Genoa) plus some new and exciting downwind sails in new design modes. The changeable weather was a great opportunity to test these under true conditions.” The downwind sails were two new asymmetrics, in light and heavy fabric, as well as two newly designs symmetric spinnakers, also in light and heavy cloth. Plus a Code Zero, which was one sail that proves versatile: “One of our favourite set-ups was the Code 0 together with the staysail for a little extra power, in up to around 15 knots of wind”, explains Sven. “But we also used the symmetric spinnakers for many, many miles.

A well designed and set symmetrical still provides best performance downwind at wind angles of around 160 degrees. The downside, of course, is the handling which explains why reaching sails such as a Code 0 are so popular with cruising folk. We were at an advantage here as we were able to fly the gennakers from a bowsprit protruding about 1.5 metres from the bow which will probably not be the case on an average cruising yacht. But at wind angles of 100 or 110 degrees, these sails are extremely effective anyway.”

Sven really cherished the fact that he could test and try the new racing spinnakers and other sails under “live” conditions on the water, and not only in a computer programme. And he believes this is also very important for him and others at Rolly Tasker Sails: “You really must know what you are talking about when helping your customers choose the best sails for their purpose. And in this respect, there is absolutely no substitute for real, hands-on experience on the water!”